M-Sport Ford World Rally Team has revealed their new livery ahead of the 2019 FIA World Rally Championship. The eye-catching EcoBoost-powered Ford Fiesta WRC will be entrusted to Elfyn Evans and Teemu Suninen throughout the 14-round season and displayed at Autosport International over the next four days.

The livery reflects the fact that 2019 will be an important year for M-Sport as a business. The automotive industry standard M-Sport Evaluation Centre is due to launch later this year and the silhouette of the state-of-the-art test track is vividly incorporated in the design.

The photogenic nitrous blue colour scheme last used in 2016 returns to the palette and the team’s valued partners are well represented.

Ford Motor Company’s long-standing financial and technical support is highlighted with the signature Blue Oval on the bonnet and side panels, while the ‘Powered by EcoBoost’ global trademark remains proudly displayed on the tailgate and rear wing.

Established partners Castrol and Michelin also retain a strong presence, as do the team’s valued trade partners – all of whose commitment has been integral to the Cumbrian squad’s continued presence in the FIA World Rally Championship.

“Next year is going to be an important year for M-Sport, and that is reflected in this new livery. We have a number of new projects coming up, including the launch of our Evaluation Centre and it’s fantastic to see the test track proudly displayed on our Ford Fiesta WRCs – two projects I’m immensely proud of merged together in this eye-catching new design.

“Support from our friends and colleagues at Ford, MS-RT, Castrol and Michelin is well represented as well as our valued trade partners – and I would like to take this opportunity to thank them all as we simply wouldn’t have been able to continue in the FIA World Rally Championship without their support.” 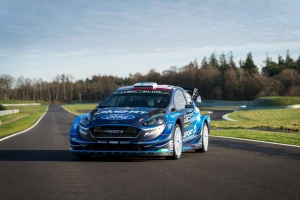 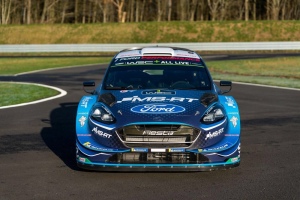