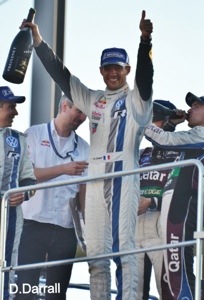 It was a very tough weekend for the WRC crews. Many hit trouble, but one driver who kept his head and his car going was Volkswagens Champ, Sebastien Ogier.

“It was the perfect week, a victory in the rally and the Power Stage,” said Ogier. “I came here very angry after a small mistake in Sweden and that’s the best way to restart my winning ways in the championship. Now we are looking forward to continuing like that.”

It wasn’t just Ogier who was dominant, Volkwagen once again seemed to have raised the bar with their performance by making it another 1-2 victory, with Flying Finn Jari Matti latvala taking 2nd place after Mads Ostberg went out after his ‘viking fix’ repairs to his broken suspension gave out putting an end to his rally.

After a disastrous start to the season in Monte and Sweden for the new-comers Hyundai Shell World Rally Team. They had finally scored some points. Not only that, lead driver Thierry Neuville was in 3rd position after the final stage. However, drama on the way back to final service as the Hyundai’s Radiator was damaged and loosing coolant. There was some very tense moments for the team back at service. As everyone awaited Neuville, he was still road side trying to repair the car. Without any water around him to top up the radiator, they used a genius soloution….. Beer! Thats right , the drivers got their hands on a bottle of corona – Who are sponsors of Rally Mexico – and poured it into the Hyundai’s radiator to act as coolant. Toped up with beer, the car made it home to the safety of service, and ensured Neuville’s 3rd place. Hyundai’s first WRC points and first ever Podium.

Kris meeke had a few struggles on his first try in mexico, broken suspension on friday and then his rally came to an end again on the power stage when he hit a rock and spun off, getting stuck and blocking the stage meant that his rally ended on the back of a tow truck. Robert Kubica also hit trouble. He first crashed on the first corner of friday nights super special. He then crashed out again on saturday due to pace note error. Joining him on the crash list was Andreas Mikkelsen. Also having missing info in his notes. The words ‘Don’t cut’ would have helped him to avoid the crash, as he cut a fast left hander which threw the car up into the air, rolling their day to an end.

Fords Mikko Hirvonen seemed to have found his mojo again on the gravel. Battling for 2nd place with Ostberg in sight until an electrical problem put an end to his brilliant run. Hirvonen said, “We had a techn. failure and had to retire. That’s a shame.. Pace was good, we were in the fight & loving it. But it’s part of the game”

Making a career best finish in his debut season in a World Rally Car was Welshman Elfyn Evans, keeping the car and himself out of trouble to finish in 4th. Picking up a lot of experience. In 5th place is Martin Prokop, also keeping out of trouble. Mexican driver Benito Guerra finishing his home event in 6th place.

A driver who should win an award for perseverance is Chris Atkinson. Despite having problem after problem he made it to the end of the rally in 7th, scoring Hyundai’s first WRC points along with his 3rd placed team mate.