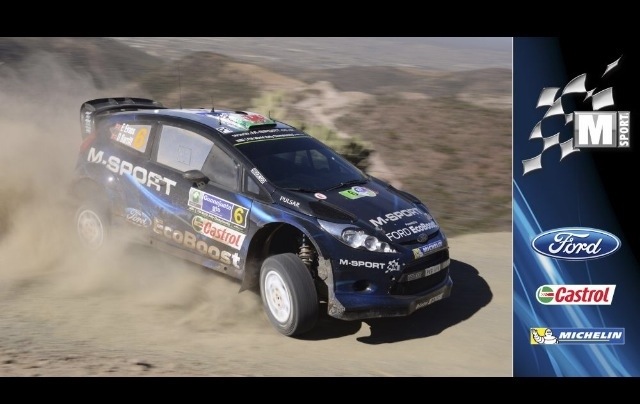 It was a job well done for the M-Sport World Rally Team today as Elfyn Evans secured a career-best fourth place at Rally Mexico. Mikko Hirvonen also fought back to eighth place – demonstrating his potential to challenge for the top positions through the loose-surface terrain.

Following an inspired drive on his first venture to the Mexican event, Evans was one of the success stories of the weekend. Having been in the fight for the podium positions, the youngster showed real maturity with flashes of speed on what is only his fourth event behind the wheel of the Ford Fiesta RS WRC.

With his mind firmly fixed on developing his skills as a world-class driver, the Welshman refused to be drawn into any unnecessary risks. Despite having the upper-hand over rival Thierry Neuville through the opening speed tests, experience played its card and the rookie opted for the sensible approach – unfazed by the tempting prospect of a maiden FIA World Rally Championship (WRC) podium.

This weekend’s event marks a landmark for both Evans and his co-driver Daniel Barritt – each surpassing their previous ‘bests’ of sixth and fifth respectively. Learning with each new kilometre, the British duo are creating the foundations for what is set to be a very impressive development year.

In the sister M-Sport Fiesta RS WRC, Hirvonen and co-driver Jarmo Lehtinen came back strongly following their earlier disappointment. Having been forced to accept Rally 2 regulations with a high temperature reading on the IDU (driver injector unit) through Friday’s second pass of ‘Las Minas’ (SS8), the Finns refused to give up the fight.

Testing a number of set-up configurations for the up-coming loose-surface events, Hirvonen looked at one behind the wheel of his Fiesta. After setting a string of top-three stage times on Saturday’s tricky leg through the Sierra de Lobos mountains, the Finn continued his strong showing today.
Saving his tyres over the opening speed tests, the popular driver went on the attack for the points-paying Power Stage. Despite running first on the road, he set the third fastest time to add an additional point to those secured in his creditable comeback to eighth place overall.

Come the end of an encouraging event, the M-Sport World Rally Team will be full of confidence as the WRC returns to Europe for the gravel tracks of Rally de Portugal in three weeks’ time.

“I certainly didn’t come here expecting to finish fourth – simply to finish would have been an achievement given how little experience we have on these kinds of stages and how many of the top drivers were caught out!

“We put in some strong performances on some individual stages and identified a few areas for improvement as the weekend went on. It’s all part of the learning curve and we’re really looking forward to Portugal.”

“It was a real shame that we had the problem on Friday, but that is part of the game sometimes. We would certainly have been fighting for the podium – maybe even the second place as well – but there are still a lot of positives to take from this event.

“I believe we can definitely fight as the season goes on. We were able to try a few things with the car over the last couple of days, and I am feeling really happy with what we have learnt. We have a few ideas on how we can make further improvements and with more testing coming up I think we can develop even more and be a real threat on all of the rallies.”

“It has been a very encouraging weekend for us. Elfyn [Evans] is progressing really well and his fourth place – his best ever finish in the WRC – is thoroughly well deserved. He wasn’t drawn into any unnecessary battles and did exactly what was asked of him – all in all a very mature drive from a driver who has the potential to do extremely well in the future.

“It was also good to see Mikko [Hirvonen] get his spark back. The problem on Friday was a real disappointment for the team, but the way he fought back proves that he has lost none of his ambition or his determination to win. He goes to Portugal with his confidence high and the potential to be a real contender for the top positions.”

Yuriy Protasov and Pavlo Cherepin secured a second victory in the WRC 2 category today, to take a clear lead in the championship standings.

Matching the speed of their rivals, the Ukrainian pairing – who pilot an M-Sport prepared Ford Fiesta R5 – adopted a tactical drive through Mexico’s challenging stages to finish inside the overall top-ten for the second time this season.

With close to a 25 minute lead going into the final day, not even a broken driveshaft – incurred after a heavy landing on SS19 – could halt the youngster on what has been a very mature and impressive drive.

Making it though all 22 stages, the Ukrainian finished 23 minutes ahead of his nearest rival to affect a clean-sweep of WRC 2 victories for M-Sport’s range of Ford Fiesta rally cars so far this season.

“We are happier than we could have ever imaged to be at the end of this rally. It was a very good result for us and to have won by such a margin – against so many strong drivers – is a very good feeling.”

“With so much drama this weekend, Yuriy [Protasov] didn’t put a foot wrong, and even when he developed a small issue on the final day, he had established such a strong lead that he was able to manage the issue and take the Fiesta home for another thoroughly deserved victory.

“It is very satisfying indeed to see our cars performing so well in the WRC’s premier support series. Thanks to Yuriy’s victory this weekend, a Fiesta has won every single round of the series so far this year and that is a big boost for the teams both on- and off-event who put a vast amount of work into each and every one of our Fiesta models.”