The Finn lead from Day 1 when he took the lead from his team mate on Stage 3 and never lost it, although his rivals were beginning to creep in on him towards the end of the Rally, Latvala was never under any real threat of loosing his lead. Up until The afternoon of Day 3 it looked set to be a Ford 1 – 2. Latvala’s team mate, Petter Solberg was also on pace. Led the first 2 stages of the Rally, but suffered from grip and lost time to drop him to 2nd position. But still keeping up the pace to keep Citroën behind until Day 3. Petter had damaged the front right tyre after a jump on SS16 and lost him enough time to drop him down to 3rd behind 8 times Champion Sebastien Loeb.

Solberg, determined to get that 2nd place back to claim Fords 1st 1 – 2 since Rally Australia last year, he kept on pushing, but maybe over driving at times as the Norwegian seemed to run wide in places. On SS18 Solberg managed to claw back that 2nd place but was just a mere two tenths of a second ahead of Loeb going into the final PowerStage. But Solberg didn’t wanna risk a repeat of Greece when he pushed to beat Loeb and went off. The Norwegian did push but it wasn’t hard enough, and Solberg had to settle for 3rd place on Wales Rally GB. 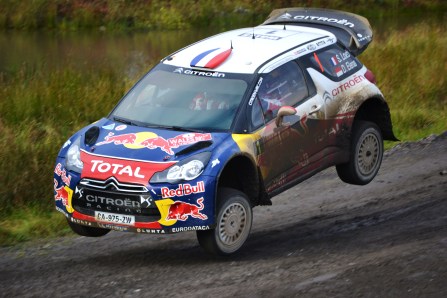 It was a disappointing Rally for Citroën, the DS3 seemed to struggle a lot in the welsh Forests, mostly with grip. Both Loeb and Hirvonen’s tyres seemed to of worn out a lot quicker than the others, and were at times off pace. Although Loeb made the most of it to get a few fastest stage times. Hirvonen’s seemed to suffer the most. Very in happy in the morning of day 2, but their pace improved and Hirvonen went fastest on the PowerStage to Claim 3 bonus points, Loeb 2nd fastest. That put Loeb 2nd place overall and Mikko Hirvonen Ended the rally in 5th.

The best of the rest was Ford Privateer Mads Ostberg, he took his first WRC stage won since 2009 and put in some good times. The Norwegian finished 4th overall.