The final and 5th day of the 80th running of the Monte Carlo Rally. It was a great return to the championship as season opener and the event didn’t disappoint. After all the politics and crisis that the sport has been through over the last 2 months, it was finally back to racing on the world stage.

Day 5 of the Monte Carlo Rally consisted of just one stage. The final Power Stage. Loeb started the day leading by 2 minutes, but it wasnt easy. On day 1 it was Jari Matti Latvala that had the lead over Loeb. But that battle came to an end when Latvala slid off the road, unable to get back on, it was over for the Fords number 1.

After that the closest battle over the week, was the battle for 2nd between Mini’s Dani Sordo and Fords Petter Solberg. For most of the event they swapped positions almost on a stage to stage basis. Untill Petter spun on SS12 and out of the battle for 2nd and under threat by Hirvonen in 4th.

On Day 4, the rally took the drivers up to the Col de Turini. Mikko Hirvonen showed he was getting comfortable with his new DS3 and took his first stage win in the Citroen. After that, Petter Solberg showed the kind of pace we havent seen for many years. The old Solberg was back! Winning 3 of the 4 stages, pulling away from Hirvonen and closed within 19 seconds of 2nd place Sordo. But with just the 5km Powerstage to go, it was unlikely for him to re-take it.

Day 5. Campana, who is a paying driver, replacing Kris Meeke in the team for this one event, had Power steering problems, but managed to bring his Mini home to finish 9th Overall. Delecour has driven the Monte many times, and finished this years event in WRC in 6th. On this final stage, it was delecours Co-Driver, Dominique Sauvignoni’s Last rally. As a retirement present delecour swapped seats with his co-driver to allow him to drive the car. “I am Happy, this is the Monte Carlo Rally. It was the best result for Dominique – he stops now, I read the pace notes, he drove well!” Next to finish was Evgeny Novikov. The russian finished the rally in 5th place. He drove a great rally, showed good consistent and controlled performance. He proved this by going 3rd fastest on the Power stage for 1 bonus point.

Mikko Hirvonen completes his first event in the Citroen DS3. Few stage wins once he got up to speed with the car, finished 4th overall, just off the podium. “I am quite happy, i was aiming for the podium, but new car – Its driving for me very well and i am happy. i’m hoping we can get a good speed for Sweden”. The fin was 2nd fastest on the Power stage, 1.2 seconds slower than team mate loeb, and picks up 2 bonus points.

The old petter Solberg was back and finished the rally in 3rd place. His best start to the season and in monte. His previous best finish was 6th in the Subaru. Although, the Ford driver didn’t have the best final stage. After his puncture, all he had left was 3 used Slick tyres, so had to opt for one winter tyre on the front right, this put him 13th fastest. but it didn’t matter, as he did the best job he could and was very happy once again. After spending the last 3 years running his own team, hes now able to fight in a factory car, at the top once again, at stage end he celebrated as if he’d won the rally. Surely that win can’t be far away. 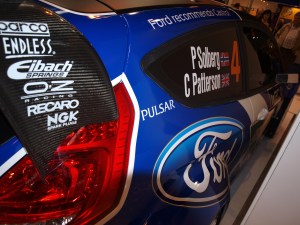 Dani Sordo is anther driver who couldn’t have had a better start to the season. finished 2nd. A great result by himself and the Mini John Cooper works team. Last year in the Mini his best finishes where 3rd in Germany and 2nd in France. Now 2nd again here in Monte, its just a matter of time before Mini & Dani’s first win will come.

But once again, incase anyone had forgotten why this man is 8 times World Champion. Sebastien Loeb took the victory. Loebs 68th career win, and 6th win in Monte Carlo. And if winning that wasnt enough, he also went on to win the power stage to take maximum points, combined with the 3 bonus points he starts the championship with 28 points. Even completing the Power Stage on 4 brand new slicks, showing great tyre management by the Citroen team.