The penultimate round of the WRC takes us to Spain. A fairly new addition to the World championship, moving to Salou in 2005 where the rally is now based. But has always been an exciting event. Last year the Tarmac based event, ran as a mixed event of Gravel and Tarmac. This years event will be much the same, with day 1 being ran on mostly gravel, with the WRC cars in their Gravel spec and at the end of day one service (Flexi service) we shall see the gravel eating WRC machines be transformed into the lowered and more aggressive tarmac spec for the remaining 2 days. With bigger brakes, stiffer and lowered suspension and change of set up, the crews will then go out and tackle the twisty tarmac roads of the Costa Daurada region. 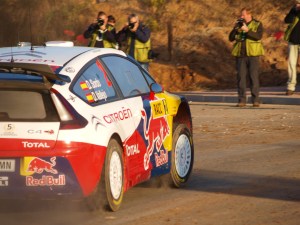 These final two rounds of the championship are crucial for the title fight, with Loeb and Hirvonen tided on 196 points and Ogier 3 points behind them, the championship will go down to the wire as neither 3 of them can afford to make a mistake.

Loeb has always been known for being unbeatable on tarmac, and has won the event every time since it was based in Salou in 2005. Despite this, and after 2 rounds on tarmac this year, he is yet to win on the black stuff this season. The 7 times champion even failed to get to the finish of his home event due to engine trouble. This has elevated Rival Ford driver Mikko Hirvonen to share the top spot in the standings. Can loeb get back on his tarmac winning form?

Hirvonen says that he will be going flat out for victory, but the Finn has never really shown the sort of pace on tarmac that matches that of the Citroen’s. However with day 1 on Gravel, and an advantageous road position behind Loeb, he could change all that this weekend. Where loeb has faultered, Ogier has gained. The young Citroen driver has won both tarmac events earlier on this season, and is just 3 points away from the top in the standings, but Citroen have made it clear who is number one in the team, and he may not be ‘allowed’ to fight for the victory, despite his impressive pace this season.

Anther man to look out for is the Mini John copper works WRC driver Dani Sordo. The Spaniard will want to please his home fans this weekend with his first ever WRC victory and came close to that last time out in France with some very impressive performances and finished 2nd overall.

A driver who many fans will be waiting to see perform, will be the 2007 F1 World Champion Kimi Raikonen. Last year he didnt even make the start after binning it on his frist run though shakedown stage, but if any event was going to suit him, it would be the sealed surfaces on days 2 and 3 here in Spain. (Click here to see Kimi’s shakedown smash)

This weekends rally kicks off early on Friday morning on gravel, the weekend includes 406,52 Km’s over 18 stages. With the power stage on Coll de Teixeta just 4.3Km, where the extra bonus points could play a crucial part in the out come of the championship.

Keep up-to-date with all the days action, news and Photos this weekend here on Insiderally.com.