This is the rally everybody has been waiting for. For the first time this season we get a real comparison between the Fords and the Citroens. This coming weekend will be war. Ford took first blood in the frozen forests of Sweden to lock out the podium, then in the high altitude mountains of Mexico, it was almost civil war between the two Citroen’s, both fighting each other for dominance, both for in the team and the championship. Which ended with Ogier over the limit and off the road, and Seb Loeb taking the win. But the two Fords consistency got them on the other two steps of the podium.

With both Sweden and Mexico being specialist events, the first time we get to really compare the two cars on gravel will be in portugal this weekend. It won’t just be a battle between Sebastien Loeb and Mikko Hirvonen, but also of Xavier Mestelan-Pinon and Christian Loriaux. Who’s built and designed the better car? The Citroen DS3 or the Ford Fiesta RS.

Who will win? Apart from Loeb, the other favorites for victory will be Ogier and Solberg. Ogier took his first WRC victory here just 10 months ago, beating his french team mate Loeb in a straight fight over the 3 days. Solberg will be chasing that illusive first win for 5 years and with both of them running six and five on the road respectively. The Portuguese gravel does clean if it stays dry, however drivers ahead can unearth big suspension-smashing rocks. Winning from the front is certainly possible, even in the driest of conditions – as Ogier demonstrated last season.

This years Rally Portugal has been moved from May to March, and could make a big difference to the roads. Last years Summer had just stared in the Algarve, but next week we’re still firmly in spring. And that could mean changeable weather. And the condition of the roads will depend on the type of winter they’ve had. Something the crews won’t know until the recce. If it does turn wet, the running order could be turned up side down, with first on the road often becoming the most favoured position. But, if it’s dry, the gravel will be loose and championship leader Mikko Hirvonen will be forced to sweep the road for the second event in succession. 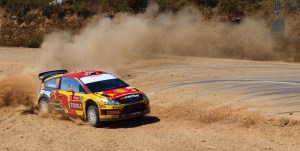 Hirvonen’s team mate, Latvala has been here three times and twice, his car has departed on a tow truck. In 2009, bits of the car probably left on different tow trucks, so wide was the dispersal of Ford Focus parts after he rolled down a mountain, and last year, putting a tree 2 feet into the backend of his old Focus.

Stobart drivers Mads Ostberg, Henning Solberg and Matthew Wilson will have a good road position and will be going for a top ten finish. Ostberg Possibly aiming higher after his 2nd place in Sweden. Other Fiesta drivers keen to get to the finish will be Ken Block, who had a torrid time in Mexico retiring and SuperRallying on every day of the event. Khalid Al Qassimi and Dennis Kuipers, will both be looking to build their knowledge of the new Ford – with the Dutchman also hoping to overcome his Mexican roll.

Making a return after missing Mexco, Kimi Raikkonen will be hoping to improve on his 10th place from last year. Also Peter van Merksteijn Jr makes his Citroen debut, raising the number of DS3s to five in Faro.

For the Portugues fans, Bernardo Sousa will get his chance on his home round of the world championship, driving a Fiesta RS WRC, and countryman Bruno Magalhaes will also be out to impress in his Peugeot 207 S2000, particularly on the streets of his home city in Lisbon.

But the biggest cheers will be saved for two-time PWRC champ Armindo Araujo who, along with Brazilian Daniel Oliveira, will give the new MINI John Cooper Works S2000 its much-awaited world debut on this event. The full factory World Rally Cars come in Sardinia, but this S2000 version will give a definite indication as to the direction car builder Prodrive has taken with the MINI.

Portugal will also be a round of the PWRC. Two times New Zealand rally champion, Hayden Paddon will be staring his season. Fresh from the pirelli star driver scheme last year, he will be looking for a win in his new Subaru. Martin Semerad will also be looking to build on his perfect start in Sweden with another victory in his Mitsubishi. Leading Subaru drivers Patrick Flodin and Anders Grondal will be ready to stand in the former Pirelli Star Driver’s way.

Talking of Pirelli Star Drivers, six have been selected for this season and this week will mark their first outing as part of the all-new FIA WRC Academy young driver training series. Twenty rising hopefuls will line up for the first event in identical Ford Fiesta R2s prepared and maintained by M-Sport.

Most of the event will go unchanged, though there are small changes such as Shakedown on the Wednesday, and the running of a 3.67Km SuperSpecial in Lisboa. Over the 3days there will be a total of 17 Stages, 385.37km, with Santana da Serra being the final Live TV broadcasted ‘Power Stage’, where the Championship contenders further down the table will be trying to make up for their points by gunning for the 3 bonus points.

Keep up-to-date with all the action, news, stories and Photos here on insiderally.com.

This entry was posted in WRC and tagged Portugal, rally, WRC. Bookmark the permalink.