The WRC is always full of Adventure stories, and the build up to Rally Portugal is no different. Freelance Cameraman and owner of Northern-Loop Productions, David Dwyer took a 1600 mile road trip to Portugal to film Round 3 of the World Rally Championships, and tells us about his adventure on the ‘Road to the WRC’.

So after watching the sun go down on the Algarve I thought I’d put together a couple of words what I’ve actually done over the last 48 hours. So Wednesday afternoon I set off from Cardiff to drive the 1600 miles to Faro for the Rally de Portugal next weekend.

Leaving Wales, driving over the River Seven bridge I was thinking to myself what the **** am I doing, driving all this way on my own.. All was going great until I hit Heathrow and saw signs from M4 CLOSED! Great the only think I had to be on time for was the channel tunnel, so I sat there for about 3 hours moving about 10 meters.

My tunnel crossing was for 19:30 and I eventually made it there for about 21:00. The great thing about the tunnel is there is no messing around, yep I was late but popped my card into the machine and said “Yep your late but here is the next crossing” No additional charges! Respect

My plan was to find a quiet place about 50 miles outside Calais and sleep in the car, but because of the delay I carried on driving for about 4 hours. A couple of wrong turns here and there I was doing alright!

I would like to point out I think my TomTom Navigator wants to be a WRC Co-Driver because it took me down some single track roads in the middle of nowhere with hard turns left and over crests! After kicking it up the backside I found somewhere to sleep.

Sleeping in the car was rough but I’m trying to keep the costs down. Some of you will probably say well why didn’t you fly then? Well I only managed to get funding a week before leaving so by the time I had the money flights were too expensive. I also have a massive problem with all the weight I need, like tripod as well as the 15 pairs of clothes because of the dust.

Anyways I woke up Thursday morning about 8:30, 5 miles down the road I found a McDonalds. Now I can’t speak a single word of French but I was starving. So I had to try “Hello do you speak English? Err NON” So I smiled and replied back with breakfast? Café? Please We got there in the end and I had some bacon/egg mcmuffin, result so ate that and ordered another coffee and mcmuffin.

Driving through France was a doddle; I stopped somewhere outside Bordeaux. I did bring a double inflatable bed with me so I folded down my rear seats and lay my entire luggage under the bed and set that up for a little power nap (3 hours later) I woke up! The time was about 6pm now so I carried on driving into the night.

Going through Northern Spain was a little scary, everyone was driving so fast and I didn’t fully know where I was going but made it to service station about 2am and it was time to have a sleep. Woke up the Friday morning about 7:30am absolutely freezing! It was 2c outside!!!

Packed everything back into its proper place in the car and heading off. While I was driving through Spain I was looking for a McDonalds or something to eat but there was nothing so I open my stash of Mars Bar’s, Kit Kat chunky and packs of Cheese and Onion crisps! Wasn’t the greatest breakfast but I still had 600-700 miles to do.

The miles just seem to fall away and I was in Savilla by 3pm, stopped for another little power nap and then made the last 2 hour drive to Faro! Before heading to the hotel I stopped off at the service park and took some pictures so make sure you check them out.

I can’t wait for the Rally de Portugal to start, I’ll be filming the Recce days and hope to find some testing days on Sunday/Monday so keep an eye out here and on my YouTube Channel.

Hotel has free Wi-Fi in the lobby so I should be able to edit the videos at upload of an evening.

Portugal is a fantastic place, this is only my second time here but I can’t wait to get out and see the place properly. 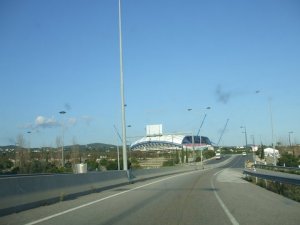 I know at the start of this I said a couple of words but as you have seen from this trip I don’t do anything by half’s! Heh

This entry was posted in Dan's WRC Blog. Bookmark the permalink.