It seemed like a good idea at the time…… Standing on a hill-side, in Wales in the middle of nowhere in the middle of November. Friday was pretty, a touch of that blue stuff in the sky, which I’m told is a rare occurrence in Wales. But then, everything changed! 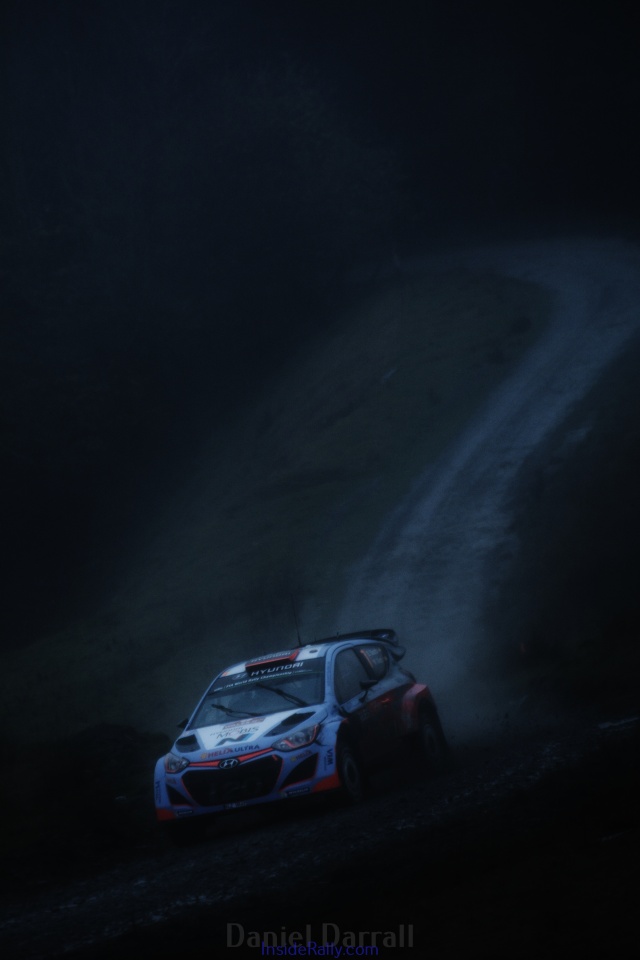 I have developed my own Weather-O-Meter on WRC events, to help gauge how severe weather conditions are. Friday was at water run off level. As it slowly runs off my personal outer water proof housing. Saturday I experienced much higher levels of wetness and muddiness. Mostly because us silly, crazy rally fans decided that standing on a hill-side in Wales, in November, In a lovely Hurricane called Abigail was a good idea! This was at a slightly uncomfortable wet shoulder level on my Weather-O-Meter. As the strong winds and Rain, penetrating through the top levels of my upper layers of clothing. This is where my car become a clothes dryer between stages, with layers covering various heating vents throughout my DS3 to dry out before facing it again. 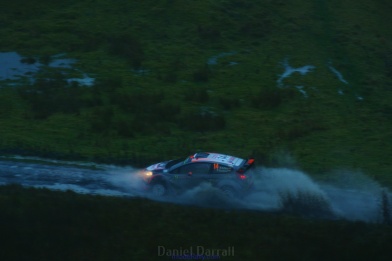 It was at a similar level to that to Rally Portugal in 2012, when the afternoon of Day 1 was cancelled, and that was the worst I had been in. But no cancellation here, Oh no. Rally GB organisers were much tougher than that, and they weren’t going to give in that easily! But it wasn’t easy. Abigail struck hard over night! Ironic to give a hurricane a name with ‘gale’ in it. Anyway – She gave her all and destroyed the service park, amongst many other things. But where the hard-working Organisers fell, they got back up again and they re-built. In some places they fell again, and rebuilt again, and fell again, and…. well you get the picture, they never gave up!

Sunday was here. And I thought that being inside a very wet Abigail (The hurricane I mean, obviously!) Was a good idea. Did I mention us Rally Fans were crazy!?… Now, we originally planned to head to Great Orme as it is, Photographically, the best stage of the rally. But as the weather was bad I decided that two runs of Brenig was a better choice. Glad we did too, as the Orme was closed to spectators, due to Abigail having the possibility of kindly blowing people off the cliffs there and into the Atlantic Ocean. Now my weather-O-Meter system isn’t the most accurate ways to measure extreme weather. But I can honestly say that, when you’re wearing terribly cheap water proof clothing, several layers of jeans, tops and thermals while in a hurricane while standing on a tall exposed dam for hours, and then end your evening back at the hotel, rinsing out your underpants….. Then it means that you have reached the  ‘very wet’ and ‘severe’ level on my old trusty Weather-O-Meter scale. And was for sure the WORST and toughest conditions ive ever been in. My still very Soggy Boggy Socks are also proof of this.

But my word it was a brilliant weekend. Yes, yes I know, I’ve already admitted us rallyist

fans are crazy! But the conditions made for a memorable rally, and an exciting race. We want to see the best drivers in the world having their job made even harder (Sorry boys, but its true). And seeing the cars battle through these incredible conditions, fully sideways and totally committed. Over the edge and over the limit. And still be within touching distance of each other. If such a thing as ‘touching distance’ exists in the world of a Frenchman named Sebastien. No surprise by Ogier winning – But Meeke did an amazing job to keep up the pace and finish at all, let alone in 2nd on his home event! As I’m sure, much to the delight of his many fans on Irish corner. Some of which are probably still stuck there, lost, searching the forests for tree growing Guinness. Was great to have that sort of atmosphere there though I must say.

Mikkelsen. Who, lets face it, is always going to be fast in the fastest and best Rally car in the world. But he proved that he is a pretty amazing driver too, in conditions that separates the men from the boys to finish a skillful 3rd, after a shocking but deserved win last time out in Spain. Oh Spain…. How I miss your burning sun and warm dry air. 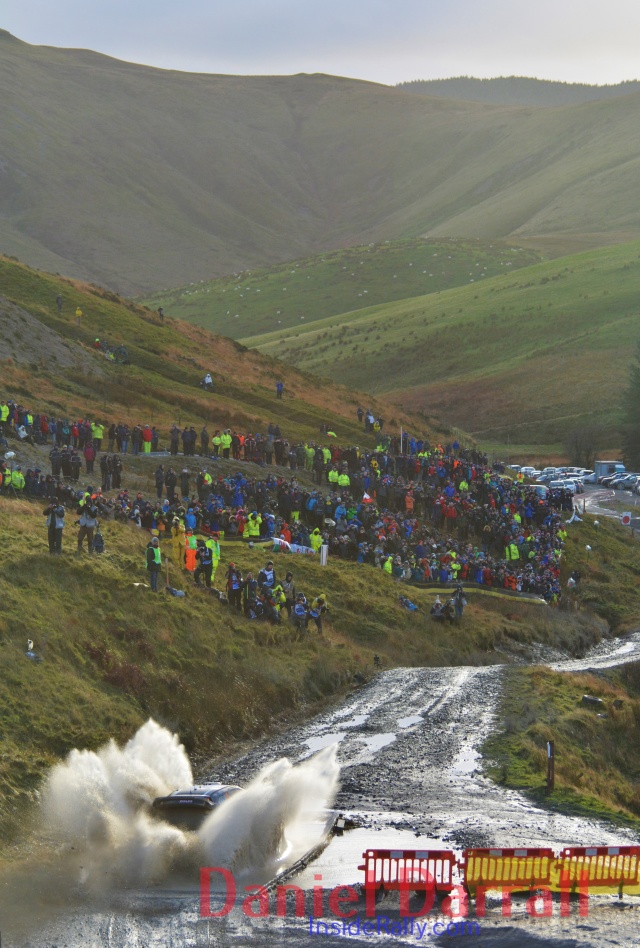 Further down the field, pretty much anyone who made it to the end, deserved a medal. Even Latvala, who seem to just find the worst of luck in the worst of places. I mean you couldn’t dig out that ditch on Sweet Lamb anymore perfectly sized to drop a Polo in it even if you tried. Or even drop the Polo so perfectly in it. Neuville proved why his boss dropped him into the 2nd team by crashing again. It’s a shame really, because Neuville is one of the fastest drivers we have in WRC currently, with the exception of Ogier of course. But his mind doesn’t seem in the right place, his world seems to be turned upside down since his M-Sport days, literally. Lets hope we see him at his best again next year with the new Hyundai.

Even further down the field. Well, actually more like in a totally different field altogether. 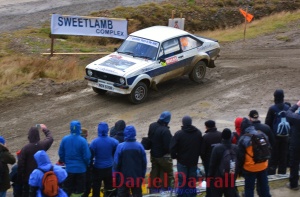 Because, racing in the national series of the WRC event. Were our dear good friends at RallyTravel. On the other side of the tape this time. Dave and Jeff, in a beautiful MkII Escort racing through their first ever competitive WRC event together. Day 1 was a tough start for them, they were 46th. Day 2 they picked up the pace and worked their way up to 24th. And then, as the stages got battered by the brutal gales and rain of Abigail. It tuned from a race into a fight for survival. Driving through stages that could only be described as deadly chocolate soup, they got to the finish…. Or at least, they thought they had. Until the Car broke down 50 meters from the finish ramp! As memories of Carlos Sainz, throwing his helmet through the windscreen from GB history came to them, and as Co-Driver Arctic Jeff readied his helmet for a window flight, they managed to push the car over the finish, and claimed a heart wrenching and later an emotional 18th Overall. Living the dream aye boys!? Very proud of them I must say.

So, as I am still drying off. I have to say that, strangely, this was the best

Wales Rally GB I have ever been to! Last year was a turning point for the event, going from pretty dreadful to becoming something on the mend to being half decent. But not this year. Oh no, this year, the event became one of the best in the season. But what really made the event were the determination of the amazing Organisers, Marshalls and Volunteers, who stood strong and battled through problem after problem. Rain, Storms, hurricane, destruction, floods, mud and even a discovery of a dead corpse never stopped them. They never gave up. They simply stood strong, rebuilt and regrouped. Kept the event running smoothly and safely for the whole week. The Drivers got their trophies and they deserved them for getting to the end. But the Biggest winner. The people who most deserved an award were the people who kept the Rally going behind the scenes. And for that, I am proud to have been there. And I cannot wait for next years Wales Rally GB.

I have to say, the one thing I will forever remember this incredible Rally for, will be how long it took, to rinse out my underwear!

Check Out Photos from this Rally in the Photo Gallery section.