M-Sport makes it to Monaco

Rallye Monte-Carlo never fails to offer a challenge, and as the M-Sport World Rally Team made their way from the Alpine town of Gap to the glamorous principality of Monte-Carlo, it would seem that today would be no different. Keeping their Ford Fiesta RS WRC’s well out of trouble, Elfyn Evans and Mikko Hirvonen made it to Monaco with all to play for in sixth and seventh places respectively.

Consistency was the name of the game for Evans and co-driver Daniel Barritt. Taking a sensible approach given their unfamiliarity of the stages, the British duo had their wits about them. Regularly posting top-ten times to rival some of their more experienced adversaries, the pairing were amongst the day’s most reliable contenders.

Where others faltered in the treacherous conditions, Evans kept his head: knowing that experience of Monte’s specialist stages could make all the difference in years to come. With his Fiesta firmly planted to the black-top stages, the youngster did exactly what was asked of him, and more by setting an impressive fourth fastest time through the final stage of the day – ‘Clumanc -Lambruisse’ (SS11).

For Hirvonen and co-driver Jarmo Lehtinen, their transition back to the proven Fiesta was far from easy. Having no previous experience of M-Sport’s up-dated challenger in such difficult conditions, the Finns aired on the side of caution.

Compromised tyre choices often meant that he had a less than favourable set-up for the rain-soaked stages, but the Finn is well aware that the phrase ‘to finish highly, first you have to finish’ is perhaps best suited to the FIA World Rally Championship’s (WRC) traditional opener.

Hirvonen has a wealth of Monte experience under his belt, and as he gets back to grips with his former machinery, will be keen to avoid the pitfalls and gain positions over tomorrow’s legendary ‘Col du Turini.’
Elfyn Evans (6th) said:

“The last stage [SS11] was good, but overall the day has just been about conserving what we have and making sure we get the car to the end. This is a fantastic opportunity for me and the knowledge we’ve gained so far is pretty invaluable. I don’t think you could experience conditions like this anywhere else, and now we just need to ensure that we make the most of it.”

“It’s been tricky. There are so many things about the car and about the set-up that you need to know for Tarmac. Now that I get more mileage, I am started to understand what I need to change to make it more comfortable for me to drive.

“It’s not easy and, driving with a compromised tyre choice all the time, it’s tough. We have to be happy that we are here. I think everyone knows that Monte is never over until it’s over and there are still some very difficult stages to come tomorrow. We just need to wait and see what happens.”

“We know from the top of the field that the [Ford] Fiesta [RS WRC] is a competitive package, but both Elfyn [Evans] and Mikko [Hirvonen] have rightly decided to take a cautious approach. It’s important for them both to get the mileage and make it to the end of the event with some points on the board.”

A spin through the second pass of ‘Vitrolles – Faye’ (SS9) may have cost Bryan Bouffier the lead of the rally, but the Frenchman is still on course for a fantastic result. Currently holding second place behind the wheel of their M-Sport run Ford Fiesta RS WRC, he and co-driver Xavier Panseri were never far from the top of the time sheets. With all to play for, Bouffier goes into tomorrow’s final leg with less than a minute separating him from the top step of the podium.

“I am really pleased with the way our rally has gone. Considering the conditions and the spin that we had [on SS9] we have to be happy to still be here in such a strong position.

“Looking at where we are now, I think it would be interesting to see some snow tomorrow. The [Day 3] stages are very narrow and when you complicate them with an added challenge like that, anything can happen. We have already seen how positions can change. But overall, our target will be to maintain this position – not to do anything stupid, and to get to the end of the rally with a good result.”

“Bryan [Bouffier] has had another great day. I think it’s fair to say that we were maybe a little ambitious with the tyre choice this afternoon as the conditions were a lot worse than we had expected, but there were a lot of moments for a lot of drivers out there.

“Sadly, Bryan’s cost him the lead, but he remains in a really strong position. Looking at his times from today, we know what he is capable of. But perhaps more importantly, we all know that anything can happen on ‘Col de Turini.’ It’s certainly all to play for.” 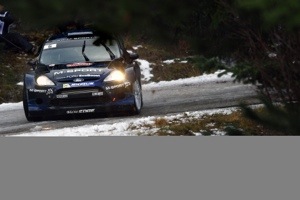