Volkswagen’s Sebastien Ogier Ends his brilliant season on a high, by winning the final round of the season on Wales Rally GB.

Its been an unbelievable year for the Volkswagen team. In their debut season in the WRC they have taken the Drivers Championship (in France) They’ve taken the manufactures Championship. (in Spain) And Sebastien Ogier ends one of the most successful years in history for a new team, by winning the final round of the championship. Making it 9 wins out of 13 events this year.

The Frenchman led the rally from the opening Night stage on Thursday. He kept a controlled pace, and managed to fend off his team mate Jari Matti Latvala, having a perfect drive. Without any mistakes, he made it to the end and took the win by 21.8 seconds. “I’m so happy, and big thanks to the team once again – the car was
perfect,” he said. “I came here knowing this rally was not the best for
me in the past, and even with that we managed to win a battle with a team-mate
who feels at home here. It was another great victory for us and the end of a
perfect season. It’s going to be a hard challenge to do better next year…”

Finishing in 2nd, making it another Volkswagen 1-2, Was Jari Matti Latvala. The finn considers this event his 2nd home after having years of experience in the Welsh mud. But Despite having the pace, He made few too many little errors, that despite only costing him 3 or 5 seconds a time. It wasn’t enough to really challenge the faultless leaded.

“I’m disappointed because I won this rally in 2011 and 2012 and I was hungry for the third victory, but it didn’t work out this year.” he said. “Speed wise it was good but there have been too many little mistakes, and a bit of hesitation. It’s like I haven’t had the rhythm all the weekend. That’s the problem and that’s what I need to concentrate on next year. The speed is there, that’s the main thing, now the rhythm needs to be right.” 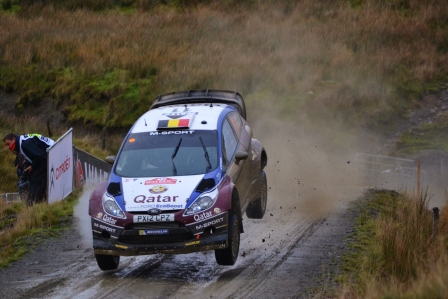 Ending his season with M-Sport before heading over to Hyundai, the new manufacture team for 2014. Thierry Neuville managed to finish on a high. The Belgium on the bottom step of the podium, but his result means he gets the runner-up spot in the Drivers Championship. “I’m really, really happy with that, it’s a result we couldn’t have imagined at the beginning of the season, with a new car and new team,” said Neuville, who bagged three bonus points by winning today’s Power Stage in his Ford Fiesta RS. The team have done such a great job and Nicolas and I worked hard to achieve this. I’m really pleased and I have to thank everybody for the help we have had. Qatar and M-Sport were just beautiful.”

A great battle went on throughout the weekend for 4th and 5th place, Between Mads Ostberg, Evgeny Novikov and Andreas Mikkelsen. But on the 2nd stage of Saturday morning, Novikov went too fast into a corner and crashed out, putting an end to his battle with Mikkelsen for 5th. Then after a few top stage times by Mikkelsen he was in a battle for 4th with Ostberg. Until a spin caused the Norwegian to drop a few seconds. Giving Ostberg 4th, and Mikkelsen having to settle for a well fought 5th place, 15.2 seconds behind.

“It was a good fight today, just a bit of a shame we didn’t find this
feeling in the car earlier,” said Ostberg. “But it’s nice to have a
positive day and have shown good speed. We have learned a lot this year, I’m
looking forward to starting again in 2014 – I will be back in Monte Carlo in a
world rally car…”

There was other dramas on Saturday morning, when Citroen drivers Robert Kubica and Mikko Hirvonen both rolled out of the rally. Kubica first out, going too fast and sliding of the road and into a ditch, shiny side down. Then Hirvonen rolled on the 3rd stage of Saturday morning, smashing the front of his car, and the roof acting as a mud scoop, filling the car and drivers with mud as it rolled. Putting an end to the rally for them. Kubica managed to return under Rally2 Regulations, only to then crash off the road again on Sunday’s 2nd stage.

This entry was posted in WRC and tagged Citroen, ford, rally, Volkswagen, WRC. Bookmark the permalink.