Hoping to continue their strong form on the black stuff this weekend will be Qatar M-Sport World Rally Team when the WRC heads to Alsace in France this weekend.

Last time out on the Tarmac was back in Rally Germany, when Qatar M-Sports Thierry Neuville was in a terrific battle for first place from start to finish. First battling with VW’s Jari Matti Latvala and then fighting with Citroen’s Dani Sordo right down to the final kilometre of the Rally with just tenths of seconds between them. (Click Here to read about the incredible Rally Germany battle)

So once again M-Sport will be looking to score high on this fast French Tarmac rally. However, there will be yet another challenge that could stand in the way of Neuville and the podium. The return of Sebastien Loeb. It’s expected that this weekend will be a battle of the Sebastien’s however, the Belgian is determined to battle with ‘the Sebs’ and to fight to keep his 2nd place in the drivers Championship. 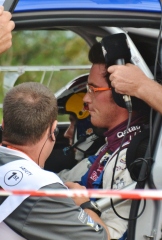 “I have a really good feeling ahead of this rally, especially as we will be returning to asphalt. We saw in Germany how competitive the [Ford] Fiesta [RS WRC] is on Tarmac so we will be hoping to harness that potential once again next week. It’s a challenging rally, especially when it rains. We saw last year that there were some big cuts and a lot of mud in places, so I think road position will be key, especially over the second pass.

“As I said in Australia, I would like to be able to take the fight to ‘the Sebs’ but we will need to think cleverly and see where we are after the first day. I am sure both of them [Ogier and Loeb] will be going flat-out and we need to keep an eye on Jari-Matti [Latvala]. Ultimately, we want to maintain our second place in the championship and that is something we will need to be aware of throughout the rally.”

Mads Østberg should not be discounted for a strong result. Asphalt may not be his preferred surface, but with a fifth place finish on last year’s outing, the Norwegian will be looking for another top-five result in 2013. As the man behind Østberg’s pacenotes, Jonas Andersson will be celebrating his 100th WRC start next week. Having started his WRC campaign in 2002, the Swede’s vast experience is sure to benefit the young Norwegian as he strives to match the Tarmac specialists.

“Germany was a difficult event for us, so it is important that we take what we learnt there forward to France. That will be the first task. Last year we were a lot faster in France than we were in Germany so that is something to focus on. The weather is always key. If it rains, then there will be a lot of mud on the stages – which is what we saw last year. But even when the weather is fine it is a really challenging event so I think it will be an interesting rally with a lot of drivers going for victory!

“For us, heading back to Tarmac, I think we just need to concentrate on getting through all the stages and securing a top-five result or higher. A top-five finish will be a good result for us, and I don’t want to hope for anything more until we see where our pace will be. This will also be Jonas’ [Andersson, co-driver] 100th WRC event, so a big congratulations to him. As well as having a lot of tattoos, he is also an extremely good co-driver. He has a lot of experience and has helped me a lot over the past four years. I only hope that I can bring him another 100 events!”

In the sister Qatar M-Sport World Rally Team Fiesta RS WRC, Evgeny Novikov and Ilka Minor will be eager to build on their solid performance at Rally Australia. Proving that he can finish events without incident, the thousands of fans that flood to the stages around Strasbourg can look forward to the Russian’s usual dose of ‘maximum attack’ as he aims to combine consistency with his customary speed. 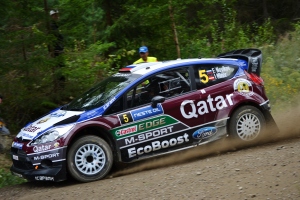 “I am feeling really good ahead of this event. We proved in Australia that we can make it through all the stages without a mistake, so now we want to couple that with upping the speed and hopefully taking home a top-five result.

“France is one of my favourite Tarmac events. The weather can make the event a real challenge, so we hope it will stay fine. The route is quite technical so you need to have very good pacenotes and ensure that you have a clever recce. Fortunately, I have a very good gravel crew to help me throughout the event, so I hope it could be a good event for us.”

This entry was posted in WRC and tagged Alsace, ford, France, rally, WRC. Bookmark the permalink.