In one months time Hayden Paddon and John Kennard will get their big chance as they will step up to the Qatar M-Sport World Rally Team for next month’s Rally de España as New Zealand’s finest make their competitive debut at the FIA World Rally Championship’s (WRC) highest level. Piloting a Ford Fiesta RS WRC in Qatar M-Sport colours, the pairing’s world rally car debut will also mark a first for New Zealand as they become the first of their countrymen to pilot a new-generation, top-specification rally car. 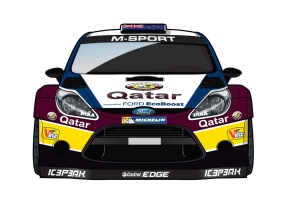 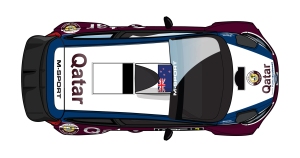 Hayden Paddon’s first taste of the WRC was With the Pirelli Star Driver scholarship for a 2010 PWRC season. It gave  Hayden the opportunity to compete on the world stage for the first time. And he did not disappoint, winning his maiden PWRC round in NZ and  finishing 3rd in the championship. In the following year In 2011 Hayden returned with his own self funded team and changing  brands to Subaru. The partnership was hugely successful, dominating the  PWRC by winning the first 4 rounds and winning the championship – the  first time for someone from the southern hemisphere. In 2012 Hayden and the team stepped into a S2000 Skoda continuing to compete in the WRC. It was a challenging year with a number of mechanical faults and small errors. They won SWRC rounds in Rally Portugal and Rally New Zealand, while showing their speed throughout the season.

M-Sport are well known for fostering young talent, and Paddon’s impressive performances of late meant the Cumbrian firm were keen to see him progress. Despite contesting just three events so far in 2013, the Kiwi has been a regular on the WRC 2 podium and has become accustomed to over-shadowing those in more powerful machinery. Nowhere was that more apparent than at this month’s Rally Australia. Although a technical issue put paid to a strong result, Paddon posted a top-ten time on all but one stage contested and was continuously faster than numerous WRC contenders.

“I am very pleased to welcome Hayden [Paddon] into the Qatar M-Sport team for Rally de España. His speed in Australia was impressive, and this is his opportunity to prove what he can do behind the wheel of a world rally car. He is in the best possible place to learn with Thierry [Neuville], Mads [Østberg] and Evgeny [Novikov] all there to offer advice and experience on how to tackle a world rally car debut.

“There is no doubt that Hayden is an extremely fast driver, and I am looking forward to seeing how he progresses through the weekend. Needless to say, I am delighted that we have been able to offer him this opportunity.”

This entry was posted in WRC, WRC Features. Bookmark the permalink.

Leave a Reply to hobbies for empty nesters Cancel reply