Sebastien Ogier took his 4th win of the year after leading Rally Italia Sardegna from start to finish, extending his lead in the drivers championship at the midway point in the season. 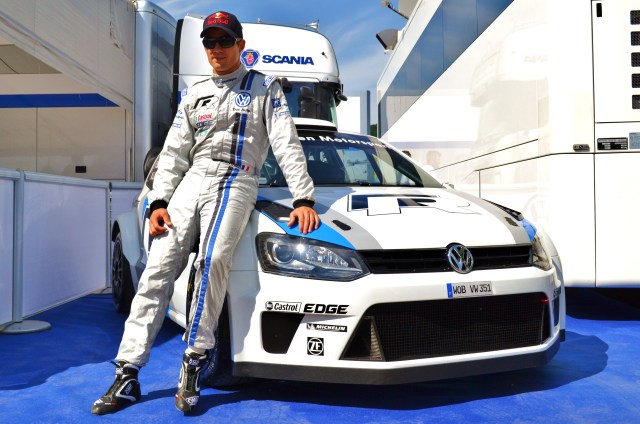 The Frenchman won by 1min 16.8sec to 2nd place Thierry Neuville, who claimed a career-best result in a Ford Fiesta RS. Jari-Matti Latvala managed to finish on the podium in a Polo R after a fight back from his stage 1 puncture which dropped him almost 2 minutes.

Ogier totally dominated the event, ending day 1 with a 46.6sec lead, extending the lead to 1 min 16 on the final day, helped by Mikko Hirvonen rolling out of a chasing 2nd place. He once again claimed maximum bonus points on the Power Stage, “We managed the rally perfectly all the time,” said Ogier. “We pushed when we needed to and were more careful when it was rough and more dangerous for the tyres. In the end it was a perfect win.”

Qatar M-Sport driver Therriy Neuville took his second consecutive podium. After Stiffening the set-up and adjusting the brakes in his Fiesta RS transformed its handling and managed to climb up the leader board to 3rd. Then taking 2nd after Hirvonen’s off. He said at the end of the final stage, “We met a cow in the stage and had to slow down and turn around,” he said. “I didn’t stress at all. I had the splits to Latvala and saw it was OK. I think our strategy here was quite good and the last few rallies have been incredible for us,”

VW’s Flying fin, Jari Matti Latvala looked good for the rally off the back of his win in Greece and then winning qualifying on Thursday. However, his hopes were shattered in the opening stage when he picked up a puncture just 8km in. He lost almost two minutes and dropped to 12th. But the fin didn’t give up, he fought his way to fifth last night and his recovery was complete when he climbed to third following Hirvonen’s demise and a mistake from the under-pressure Dani Sordo. The Finn finished 31.2sec behind Neuville and 1min 31.2sec clear of Sordo.

Dani Sordo managed to end the rally in 4th. With Citroen team-mate Hirvonen stranded in a ditch, the Spaniard was under firm instructions to come home safely and net vital manufacturers’ points.

Another last day casualty was Andreas Mikkelsen. It was the Norwegian’s 24th birthday but his pursuit of Sordo’s fourth place provided an unwanted present when he slid wide in a slow corner and broke the suspension in his Polo R putting an end to his rally

Martin Prokop took 5th after a consistent weekend in his Fiesta RS, more than five minutes behind Sordo and over three minutes clear of Elfyn Evans’ similar car.

Elfyn Evans made the best of his WRC debut, replacing nasser Al-Attiyah after his last minute withdrawal from italy. The Academy/JWRC Champ never put a wheel wrong all weekend and managed a brilliant 6th place result. making his WRC debut result even better than that of Sebastien Loeb on his first WRC outing. Could he be a star in the future?

“Obviously this result means a great deal. To finish sixth on my début is massive! I’m not sure what it means for the future, but it’s definitely improved my skills as a driver and provided me with more knowledge and experience than I could have ever hoped for. It’s brilliant… and I can’t stop smiling!”