On October 15th 2012, Ford of Europe announced that it will withdraw from the FIA World Rally Championship as a title sponsor after the 2012 season. The company said it made the decision as part of a review of its European business in the current difficult economic environment. That was almost a year after Ford announced that they would re-enter the WRC with M-Sport despite problems such as lack of promoter ect. 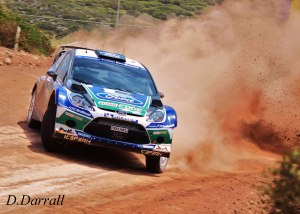 Ford in the WRC has a huge history, dating as far back as the 60’s. The Lotus Cortina was one of Fords first proper rally winning cars, one of the most famous Lotus Cortina drivers was Jim Clark. Then in 1968 the Escort twin cam made its debut on the 68′ Sanremo Rally, driven by Ove Andersson. Rodger Clark took its maiden win in the same year on the Circuit of Ireland. the Fords were very competitive on Gravel by the time the ‘World Rally Championships for Drivers’ arrived in 1973, Ford were dominant in Brittan, but on a global level Ford wasn’t as committed, and so they struggled to match manufactures such as Lancia in the World Championship.

The Italians dominated the WRC in 77′ & 78′ with the likes of Markku Alen and Walter Rohrl. Ford had to do something to try and compete with them. Fords answer was the Escort RS1800. The model that would go on to become the most famous and successful Ford in the history of Rallying. With improved suspension from the MK1 to the Mk2, joined with Fuel-injection with around 280bhp, the 1979 MK2 Escort went on to win the WRC with Bjorn Waldegard and then again in 1981 with Ari Vatanen. 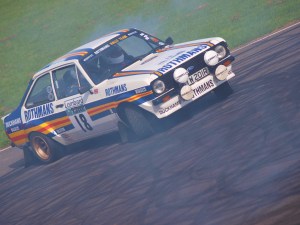 Then in the 80’s the Audi Quattro came in with its all-new four-wheel-drive system, along with the Group B cars, Ford had to develop something radical to keep up. They went to work on the Ford RS200, a super-fast, mid-engine, four wheel drive machine. Unfortunately just as the RS200 was finishing development, the dangerous Group B cars were Banned after a series of fatal crashes.

In the 90’s the only real Group A competing Ford was the Sierra RS Cosworth 1990. While that was running and the WRC began to be taken up by the Japanese market. Ford began on working on a comeback for the Escort name. The Ford Escort RS Cosworth ran in national rallies for development before making its debut on the world stage in Monte Carlo in 1993. The Escort cosworth went on to claim 30 podiums and 8 WRC wins.

In 1997 the Ford WRC program was taken over by Malcolm Wilson and M-Sport. Wilson ran the Escorts which became ‘World Rally Cars’ due to change in regulations till 1999. Then the first true M-Sport built and developed WRC car hit the World Stage. The Ford Focus WRC. It was an interesting start for M-Sport and their first proper WRC car. The new focus which was put together by a very small team of people up at Dovenby Hall in Cumbria with a small budget, had a few teething problems, such as its tendency to catch fire and sometimes just not work at all, despite signing up the world’s most expensive Rally Driver Colin McRae. The Focus was excluded from its debut in Monte Carlo due to the Water pump being set in the wrong place. But the hard work paid off on the Safari Rally just a few events in. McRae and M-Sport’s Focus took the win on one of the toughest events in the Championship. This was an important boost for the team. Between 1999 and 2000, McRae only managed to finish 1 rally out of 12 starts. It was a tough first year for the team. But in 2001 M-Sport and McRae found themself battling Subaru’s Richard Burns for the Drivers’ Championship, The fight for the title came down to the final rally, where McRae had one of the most spectacular crashes in his Focus on Rally GB, Ending his hopes of winning.

In 2004 Ford came very close to ending its program, but after some negotiations from M-Sport they stayed. And the rewards came with the all-new 2006 Ford Focus RS WRC06, winning back to back Manufacture titles. The Ford Focus RS WRC claimed 44 WRC wins in its time of running by M-Sport. And in 2009 Ford missed out on the Drivers title with Mikko Hirvonen by just 1 point, the championship came down to the final rally in Wales Rally GB. Then in 2011, The Regulations for WRC cars changed. The Car used for the World Rally Championships were changed from the old 2 liter, to a 1.6-Litre Turbo charged engine with around 300bhp and the cars had to be smaller in size. This was to attempt to make the sport cheaper and tempt other car Manufactures into the sport. Adjusting the sports reg’s to match the car market made for an interesting few seasons ahead.

In 2011 M-sport/Ford launched their all new Ford Fiesta RS World Rally Car after much development. Its debut was in Sweden where it took a 1-2-3 Finish with Factory and customer Fiesta’s. The beginning of the New Era for WRC was a success for Ford & M-Sport. Fords contract with M-Sport was up at the end of 2011, and there were problems with the sport behind the scenes, with the owners of North One sport, the promoter and media rights holder of the WRC going bust, North One were unable to reach their contractual agreement with the FIA. Leaving the sport with no promoter. It wasn’t a good time to evaluate whether to spend millions on a sport that no one will see. But with continued strong interest from car manufactures such as Volkswagen, Hyundai, Toyota, and Mini-BMW. Added to that and huge amount of support from fans around the world, Ford Signed a new contract with M-Sport to compete once again in 2012. It was a season of ups & downs for them in 2012. Winning in Sweden and Rally GB. But towards the end of the season, Ford once again decided it was time to pull the plug.

Over the past 50 years of Rallying and the WRC, Ford have been there. Their product has covered the last 5 decades. And despite Ford as a manufacture leaving the sport, M-Sport will still continue to use their product so ford can continue to supply to customers. Malcolm Wilson said, “M-Sport is extremely proud of our history with Ford since 1997; 208 podium finishes, scoring points on 156 consecutive events and 52 wins from 225 starts in the WRC along with two world titles underlines the dedication and commitment of the whole team in Cumbria”.

As Ford say goodbye once again, Insiderally.com would like to share some memories from our achieves from the past 3 years and show Fords past in numbers. Photos below of Ford/M-Sport in action on the World Stage taken by Daniel Darrall.