Posted on November 9, 2012 by Daniel Darrall

The WRC circus of 2012 will come to an end in Rally Espania this weekend. The Championship has already been won by the ‘Driving God’ like Frenchman Sebastien Loeb. This Rally will be a special event for the now 9 times champion, and to the Sport as a whole, as this will be Sebastien Loebs final event as a Championship competitor. At the end of this year, at the end of the Final stage of the final rally of the season in Spain, Loeb will go into retirement. Only contesting 4 or 5 events just for ‘fun’ next year as well as competing in WTCC. This will mark the end of the ‘Sebastien Loeb era’.

So no Championship to worry about, and this will be every WRC drivers last chance to see if they can beat the very best in the sports history. Add to that, Fords withdrawal from the sport, which also makes this the last WRC event for the Ford World Rally Team, everyone will be ‘flat out’ to prove a point. This is ‘The Last Dance’.

Every driver will be flat out to win. It’s all or nothing, but who will come out on top? Loeb is by far the best on tarmac, its his home surface, and will be tough to beat. The man that’s come closest to Loebs pace on tarmac recently is Fords Jari Matti Latvala. Latvala has always wanted to prove himself, and believed that one day he maybe able to catch Loeb on the Black stuff. He will also have added motivation that, Latvala being a Ford fan, he’ll want to give Ford a winning send off. Anther favorite to win, is Mini’s home boy Dani Sordo. The Spaniard sat along side Loeb as his team mate for a number of years, he has learnt from the best, now time to beat the best.

Loebs current team Mate, Mikko Hirvonen has had one of his best seasons this year. A regular in the podium spots. With the pressure off, he seems to have been able to focus more on his driving skills again, and has bearly made a mistake all year. Where Loeb has fallen, Hirvonen has picked up and been the perfect team Player. Despite Tarmac being his least favorite surface he could still be up there to back up his Team and Team mate for one last time. Back over in the Ford Camp, 2003 champ Petter Solberg is very hungry for that long overdue win. The Norwegian, most likely staying with M-sport for next year, will want to fight, if he can get comfortable enough with the car on the surface without any mistakes, if not the win then certainly a podium. With this being a mixed surface event, an early advantage is important to any of the top drivers if they want any chance of taking the fight to Loeb. 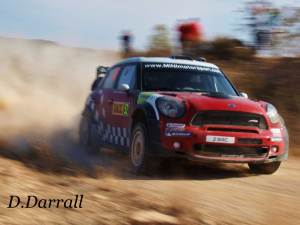 The end of this season has really showed the pace of the drivers of the Future. Neuville, Citroen’s Junior driver goes well on the black stuff and could get a few stage wins. Ott Tanak hasn’t had as good of a season as expected, but at times has shown some great pace, be interesting to see how he fares on a mixed surface event. Mads Ostberg is looking for a Factory drive next year. he has continued to impress this season, this will be his last push to show his talent to team bosses looking to fill a seat for 2013, it will be important for the young Norwegian to get a good result and set some good Stage times. Christ Atkinson will be competing in the Mini, though he hasn’t really shown his true talent compared to back in 2008 in the Subaru. There is certainly more to come from the Australian, the question is, can he up the pace or will he struggle for pace with the John Copper Works Mini Countryman.

Rally RACC Rally de Espana is based once again in Salou. Day 1 Stages will consists mostly of Gravel, with day 2 and 3 on Tarmac. Altogether there will be a total of 18 Stages. stages such as Terra Alta will be run once again this year but With a new 2km SuperSpecial stage around the Streets of Salou itself on Friday night. Friday totals 150Km’s. Saturday is the first full day on Tarmac, totals 160Km’s of competitive distance. With the final day of the rally on Sunday, again mostly on gravel totals 93km. The penultimate Stage, 26km Santa Marina being used for the Bonus Point awarded Power Stage.