Sebastien Loeb has taken the win here in Germany thats win number 74 for the 8 times World Rally Champion, and the 9th victory in Germany on the 10th anniversary of the event. 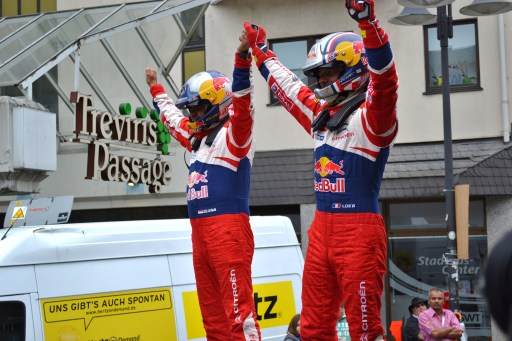 “It was a hard rally, the conditions were extremely difficult, which meant I had some very difficult tyre choices to make,” said the 38-year-old. “We had a good drive, a perfect car and I made no mistake. Winning the Power Stage also meant this was a perfect weekend. I also had a lot of support from the fans.”

Sebastien was fastest on Friday mornings opening stage, and held the lead from start to finish, winning a total of 9 stages. The frenchman had no real dramas, on the first stage of Day 2 he was the only driver to have done most of the stage in the dry which doubled his lead over the others. From that moment on it was a cruise to the end.

In 2nd place, and Fords highest driver and result in Germany fo some time, was Jari Matti Latvala. The Finn taking his best result on tarmac so far. In 3rd place was Citroen driver Mikko Hirvonen. Tarmac isnt his favorite surface, but did well to keep out of trouble, and made up places when others dropped out. Due to the big gaps, he too cruised to the finish, and even tried of few new things on the DS3 to help get it ready for the next Tarmac round in France. Mads Ostberg was the best of the rest and finished in 4th. Chris Atkinson fifth, on his maiden outing in a MINI
WRC. Last Year’s winner Sébastien Ogier was sixth overall despite contesting in a S2000 Skoda. Andreas Mikkelsen and Nasser  Al-Attiyah, Ott Tänak and Dani Sordo making up the rest of the top 10. 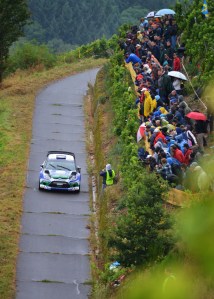 The Circus Maximus Power Stage around Trier was the endding to a wet, cold and wintery German Rally. The weather conditions, espcially on the final day were more like Rally GB than Rally germany. This made the streets of trier very slippery for the WRC’s. How ever the stage began to dry out. And as a result, the 3rd fastest driver to claim 1 bouns point was S2000 driver Mikkelsen. Beating a lot of the WRC drivers. 2nd fastest was Hirvonen. And fastest on the Power Stage, and taking Maximum WRC points was Rally winner Loeb.

This entry was posted in WRC and tagged Citroen, Germany, Loeb, rally, WRC. Bookmark the permalink.