Day 2 of Rally Germany and the rain finally came. But it caught everyone out. All the WRC guys went out on Hard tyres. But as always, Loeb was the lucky one.

Despite the Frenchman going out on Hard tyres, the first stage was actually dry when he first went out, the rain waited for Loeb to come towards the end of the stage before it Lashed down on the rest of the field. With the others struggling for grip under breaking and on exits of the corners, Loeb had, on just one stage almost doubled his lead over the rest.

On the 2nd stage of the day, Ss8. It was an even field interms of ‘wetness’. And this turned things interesting. It was Mini’s Dani Sordo who went fastest. With Solberg making up a little bit of time on Loeb, coming 2nd fastest but only 0.2 faster then Loeb. Solberg’s team mate Jari Matti Latvala was sitting well in 3rd in the overall times, but in the wet conditions the Finn Made a mistake on breaking for a corner. His brakes locked up and he went straight on. Lost enough time to drop him down to 5th overall due to the tight battle that was now forming between 3rd and 5th place. In the middle of it, was Neuville, doing a very good job this weekend, overall his 4th, just a second behind Sordo and 2 seconds ahead of Latvala. 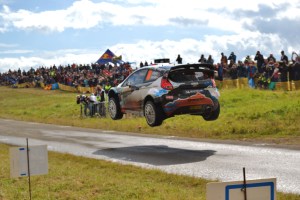 The next stage, and last of the morning loop, was the mega 46.54km Panzerplatte stage. Based in military grounds of Baumholder. A real test for drivers. Unfortunately the close battle between Sordo, Neuville and Latvala came to an end. Dani Sordo in his Mini was finally showing a strong pace until a Puncture cost him over 2 minutes. Neuville was next to suffer, went crashing off into the German military Trees.

But the biggest name at the top, and trying to put pressure on Loeb out in front, was Petter Solberg. He Hit a rock and broke suspension and steering, had to retire before the end of the Stage.

The driver who impressed the most was Ott Tanak, he set 2 fastest stage times and was up to 4th place overall. Unfortunately it was the Panzaplatte stage which once again struck hard. Tanak ripped wheel off on a hinkelsten on the stage and that was the end of the Rally for him. He wasn’t the only driver to fall on the military stage. Petter Van Merksteijn Jr rolled the car right in front of where Tanak had stopped.

Back at the top, it was business as usual for Sebastien Loeb, well on his way to win 74, endding day 2 in Rally Germany with a lead of 1:42.9 over 2nd place Latvala, and Hirvonen 3rd.