The second half of the 2012 season kicks off with the fastest event on the calendar. It’s the Grand Prix of Rallying. The Neste Oil Rally Finland. 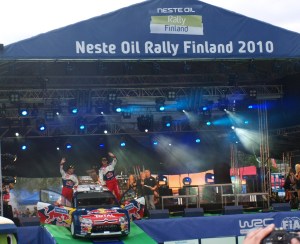 Finland is all about speed, yumps an Jumps, undulating fast flowing roads, speed, more yumps, and more speed. It takes only the best and bravest to win the event. It’s rare for a none scandanaiven driver to win here once. But of course, 8 times WRC champ Sebastien Loeb has won it twice. Loeb is currently holding a big lead in the championship over his rivals. But in the past few seasons, the others tend to closer the gap up on the Frenchman as we enter the 2nd half of the season. Finland is perhaps one of just a very few events were Loeb isn’t always favorite to win. It’s the two Fin’s that will be under pressure to win here. Now driving for Citroen and Loeb’s team mate, Mikko Hirvonen will be racing up against his former team mate over at the blue oval, Jari Matti Latvala for the win. Latvala has had a very disappointing season so far, failing to score high on most events, and in 3 events he didn’t even reach the finish, only one win in Sweden so far this season. But the young fin will be looking to prove that he still has what it takes to win. Hirvonen however has had a good season playing back-up to Loeb. He has helped the Citroen team get up on the podium and a 1-2 finish on many rallies this year. Petter Solberg will also be in contention for a win, or certainly a podium place, the closest Ford man to Loeb, but still 55 points away in the championship. Loeb of course, can never be counted out, could he make it 3 wins in Finland?… 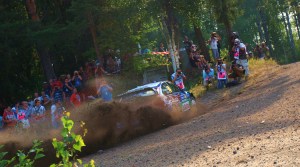 This years rally Finland, formerly known as ‘Rally of a thousand Lakes’ will be based once again in the city of

Jyväskylä, where the rally HQ and the Service park will be held. This years rally Will host the return of one of the classic and one of the best stages in the World Championship, Ouninpohja! It’s often known as a roller coaster on Gravel. With jump after jump, corner after corner, and sometimes jumps on corners. Its 33km of driving pleasure, that only the best in the world can conquer. This mega stage will run on saturday, the final day twice. The last run being the final Power Stage which will make for an exciting finish to the rally.

The Rally kicks of on Wednesday morning with Qualifying, which will take place on another passed classic, Ruuhimaki. Then the first 3 stages shall take place on Thursday night, similar to last year.

Friday will hold 9 stages, starting with the 12.75km Urria, where Hirvonen had his massive crash 2 years ago. And the day will finish with a blast around the 2km killeri stage, the super special which has also made a return to the event since a few years ago. friday will be a competitive distance of 133km’s.

Saturday, the final day of the Rally will have a total competitive distance of 139km’s. With 6 stages, starting with Surkee and Leustu, which after service will be run again, and then the drivers will have two runs through the Famous Ouninpohja stage.

This entry was posted in WRC and tagged Citroen, Finland, ford, rally, WRC. Bookmark the permalink.