The long-awaited Lotus Exige R-GT has received its starters orders from the FIA and will make its competition debut this weekend at Round 7 of the European Rally Championship in Madeira, Portugal. 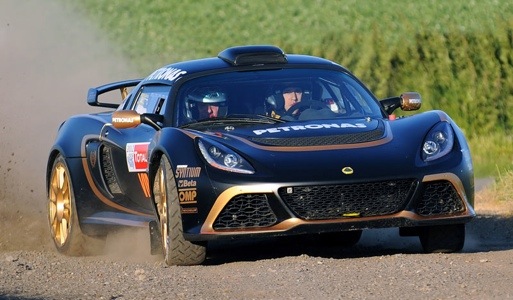 The FIA have homologated the car ready for competition. It is the first car to pass the FIA R-GT regulations.
The car will be raced by the works Lotus International Rally Team crew of Bernardo Sousa and co-driver Corrado Mancini.
The team has been testing this all-new category car for the last five months, and recorded vital miles as the course car during last month’s Geko Ypres Rally in Belgium. Sousa will be racing the Exige in anger for the first time on home turf, being Portuguese and born in Madeira. The 25-year-old has marked himself out as being one of the most promising young drivers, having taken the S2000 class win at last year’s Jordan Rally.
The first priority in Madeira will be reliability, and further fine-tuning the car during the punishing schedule of a rally weekend.
Claudio Berro, director of Lotus Racing: “This is a very exciting week for us. It’s been a long time coming because the R-GT category is all new, and it’s taken time for the rules to be written and, in turn, the car to comply with the championship. Nonetheless, the process on our side has been smooth and the development of the car is really promising. We go to Portugal with realistic aims, primarily to work on reliability and performance, but it’s going to be great to experience competition. This is the first car to be homologated by the FIA for R-GT. The R-GT class is sure to make rallying more appealing and thrilling than ever, and the acclaimed Exige will earn a huge following I’m sure.”
Pier Liberali, Team Principal of Lotus International Rally Team: “After months in which the whole team has worked hard and very professionally, the long awaited day has finally come and it is surely a very exciting day for all of us, but that also brings us a lot of responsibilities. I am sure that the team, drivers and all the Lotus staff will, after this first rally, keep working with the same intensity of the last months to bring the car to the highest standards of competitiveness. To represent Lotus is a high honour and responsibility, I wish to thank them for the trust they have put in us and in our drivers”.
For Lotus, it’s a historic return to a sport in which the marque has appeared in the past with great success. Lotus won the World Rally Championship with the Lotus Talbot Sunbeam back in 1981.

This entry was posted in IRC, Other Rallies. Bookmark the permalink.