I don’t normally like to fill this space up with politics, as that’s usually reserved for other sports such as F1. But this is a tough year for the WRC and that’s something that unfortunately seemed to be the only headlines coming out of the sport. I like to talk about the good aspects of the sport, especially when there’s a lot of bad press going around. They say you need to hit rock bottom before you can move on. And this year, the WRC is close to that.

I’ve not long returned from one of the best Rallies I’ve been to in a long time. Rally Acropolis. It was a fantastic event! Well organized, the stages were fantastic, good access to a variety of different sections for the spectators. A great battle for the win (until JML’s puncture and then Petter’s crash). And the views were spectacular. As Rally Radio’s Colin Clark said to us, it should be known as the Rally of a thousand views. And the event organizers say that the Loutraki Service Park attendance and the merchandise sales were both up by 50%. It was a reminder of just how great our sport is.

Unfortunately since then, the sport has suffered another 2 big setbacks. The first, is WRC title sponsor Nokia, who is said to have invested 3 million into the sport, has now pulled out of the WRC after just 6 rounds, despite their 3 year contract that they originally made with NOS.

The second big setback, is the calendar. Now firstly, Acropolis is said to not be on it for next year. One of the best rallies of the year, which is the opinion of most of the Drivers, Teams and media, is being kicked out to make room for a new event. And Rally New Zealand isn’t far behind. Which makes me wonder, why kick out 2 of the best events, when we have, as someone in Greece pointed out, 2 nearly 3 events in France. Rally Monte Carlo and a rather lack luster Rally in Alsace, and Rally Germany which is just a few km away? Of course Germany is a good rally, and home to VW, so that will never be removed. Monte Carlo is the glamorous Season Starter so that is fairly safe as long as they still give out the money. And the slightly boring Alsace Rally is in Loeb’s home town, so that won’t leave the calendar until the 8 times champion leaves for retirement. Meaning that we are left with the best rallies we have, to be thrown to the ashes. I understand they need to be cost effective, traveling is expensive. But the sport is all about diversity. If they want to be cost effective, why not have 2 rallies in the southern hemisphere. The crews expensively travel to New Zealand, so make it even more worth it, and have Rally Australia a week or 2 after NZ. Two great rallies for the price of one.

Right now, the sport needs money and stability. Which unfortunately means, history, iconic’s and brilliance comes after money. We have already seen talented drivers being dropped for paying drivers. And I think this is what we shall start to see with events. Places that are willing to pay the money will be looked at first and why not. As there is no promoter or big sponsors, that is the only way forward for the sport. The FIA need to create a stable and financial platform before they can sell the WRC to a promoter. But at the same time, I still think we need the classic events that still create a lot of success because the image of the sport is just as important.

However, there are things that the FIA are doing that could further unbalance the sport. The fresh crisis now is that event organisers have threatened to walk away from the one-year contract being offered by the FIA for 2013. The rallies which will form part of the 2013 schedule have been sent a five-page, single-season agreement from the FIA and told it must be signed and returned to the governing body by tomorrow (June 8). Failure to do this, they have been informed, will result in them losing their place on the calendar. The contract dispute comes over an additional €100,000 (£80,000) fee which has been imposed on the organisers to cover the cost of timing and safety tracking and the production and distribution of television.

How can they expect the organisers to do such a thing, and pay out that much money when no one is even sure if there will be TV coverage next year. I think the FIA are being a little too harsh and its now caused events to protest against the FIA. the last thing we need is Civil war between the people who run and make the sport. Autosport have quoted an event, saying “So actually, we’re having to find €125,000. And this is on top of the €140,000 [£112,000] calendar fee we already have to pay. Suddenly, it’s more than a quarter of a million to be a round. This is the complete reverse of what we had last year. We don’t sign this contract. We want to talk about it. But they [the FIA] don’t give us the chance to talk about it. We want to talk about this in June [at the WMSC], but the FIA wants us to make a decision so quickly. I think if they [the FIA] expect everybody to sign and be happy, they are very wrong.” 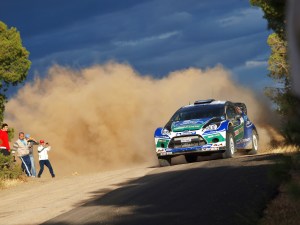 With all these problems and bad press, I’d like to end this by looking at the bright side. Yes, there is a brighter side. Its in 2013, when VW enter, bringing in with them around a 100 million euros, as well as media and TV. With that, there are also rumours of other manufactures interested in coming into our brilliant sport. Which is a great thing. Despite the problems, the WRC is still the best marketing platform for car manufactures and after the recession, the car market is now on the up once again. Meaning Manufactures will have and want to spend the money on sports such as the WRC. The WRC has not only changed the reputation of manufactures for the better, but even saved them. The likes of Mini, Peugeot, Lancia, Audi, Subaru, Ford. They have all massively benefited from the sport in ways no other sport or marketing platform could have done so. The reason these brands are so well known and have their reputation we know today was because of their success on the world stage, no matter if it was 30 years ago or 3 years ago. The sport still has so much to offer to manufactures and its because of that, that the World Rally Championships will live on and will get stronger. Long live the WRC….