Highlight of the weekend – Greece

Inside rally has picked it’s best and most spectacular moments from this weekends Rally Acropolis in Greece.

The World Rally Championships is an action packed sport and when the drivers get out on to the stages, almost anything can happen. Unlike Circuit racing, Rallying has no barriers. It’s all out in the wild, allowing no room for error. It takes only the best drivers in the world to master the rough mountain gravel stages.

The ‘Save of the Rally’

The 2nd most spectacular highlight of the weekend which deserves the ‘Save of the rally’ award, was Mikko Hirvonen who had a massive ‘near off’ on the final corner of Stage 10 on day 2 of the Rally. The Ford driver carried a little too much speed and went very wide and off the road, almost down the bank between two trees. Mikko kept it flat, and some how got the car back on the road, just centimetres away from a tree. “Now that was a close call!” said the Fin at Stage end.

Driver of the rally
But the Biggest Highlight of the Rally this weekend was from a certain Petter Solberg. Unfortunately the Norwegian only finished the rally in 4th. But his stunning drive on day 1 of the rally was inspiring. Winning the first 4 stages on Friday morning, and ended the day with a 51.6 second lead. And there was no doubt for the fans that Petter was the driver of the weekend. Petter received a massive 70% of vote on a pole run by the Rally organisers. 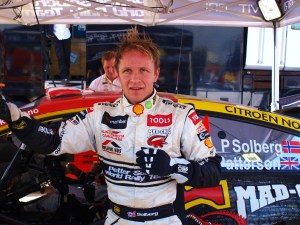 “To be honest, it has been a good weekend. For sure I was hoping for a win, and I’m very disappointed not even being on the podium, but that is how it is. I have pushed really hard all weekend, and I’m very happy with the performance, but sadly it is not good enough. We also had a problem free run this weekend, which is good.”

“The team has done a really good job. We look forward to Finland now, and the two days test planned prior to that.”

This entry was posted in WRC Features and tagged feature, highlights, rally, WRC. Bookmark the permalink.