Loeb leads after day 1 of Rally Sardinia to be first on the road for Saturday. 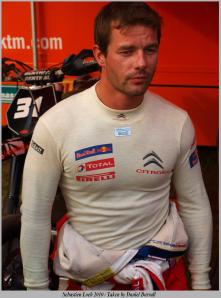 After a dramatic day 1 on the island of Sardinia Sebastien loeb leads the rally by 33.2 seconds. The Citroen driver was first on the road but surprisingly didn’t struggle to much on the sandy gravel stages, and opted to try and extend his lead rather than drop back. “it will be difficult tomorrow but we will see what I can do, but I prefer it like this with a big gap to the others behind”.

Petter Solberg started the day fastest and led after the 1st stage. He carried that speed into SS2 but then lost engine power and time due to a Turbo pipe coming loose, which dropped him down to 10th. But by the end of the day he managed to drive his way back up the leader board to end day 1 in 2nd place and said that he was “fed-up” with tactics for road order and just wants to push for the win.

Fords flying fin Mikko Hirvonen gained the led after Petters problems and was engaged in a battle with Loeb for the led. But  after going wide on stage 7 he suffered a puncture. Mikko finished the day in 3rd 51.3 off the lead. His team mate Jari-Matti Latvala didn’t have such a good day. After rolling his car on the first stage, the car landed back on the wheels an Latvala was straight back on the throttle. But on the following stage he retired with broken suspension.

Rally Sardinia marked the highly anticipated debut of the New Mini John Copper Works WRC team. Kris Meeke started with fantastic pace and was up to 4th overall after the 2nd stage, unfortunately on the next stage his throttle jammed open and he went off on a corner and it was game over. He will super rally tomorrow for day 2. His team mate in the other Mini, and ex Citroen driver, Dani Sordo stayed out of trouble and set a decent pace and ended the day in 6th.

Citroen driver and young Frenchman Sebastien Ogier struggled to get up to speed in the morning, but managed to work his way up to 2nd place on the penultimate stage but dropped time on the final stage for a better road position, he will be 4th on the road for day 2.

There was Drama at the end of stage 2. Henning was on fire, and not in a good way. At the end of the stage he made a small
Mistake and hit a bridge, which damaged an oil line, which leaked on to the hot brakes and caught fire. He arrived at the stage end with billowing smoke from the rear left of the car. After choking the boys at stage end, and nearly choking Rally radio’s Colin Clark to death. Both Henning and Co-driver Ilka Minor escaped from the car, and along with marshals, put it out and got the brunt car going again. On stage 5 he suffered a broken driveshaft, then finally had to retire on SS7.

A mix day for the other Stobart drivers. Mads Ostberg suffered with brake issues, with the pedal traveling long. But finished the day in 5th. Matthew Wilson struggled with pace but finished 8th. The young Russian Evgeny Novikov was up to 3rd at one point but crashed out on SS7