An interesting final morning here in Portugal, with the gaps so big, most are just driving to the end, with just two stages left, including the final ‘Power stage’.

Hirvonen set the fastest time in the first stage of the morning trying to make up a bit of time after the problems on the final stages yesterday where Latvala described that final stage as something out of the Dakar rally, with the amount of times he past his team mate on stage, and with Loeb stuck again in the dust. But a much better start to this morning for the Fords with Latvala 2nd quickest. Solberg 3rd fastest after trying to grab any points he can get after 4 punctures on day 1.
SS15 Was a bit more eventful, the 31km stage was very difficult and technical and will be used for the ‘Power Stage’ this afternoon. Hirvonen’s bad luck hit him again, and suffered a broken driveshaft, dropping back to 5th, allowing Stobarts Matthew Willson to get that 4th position. Solberg was fastest on the stage, maybe getting the practice in for when its used as the ‘Powerstage’ to try and get thoughs 3 extra points and is in 9th overall. Latvala 2nd quickest on stage.
Citroens of the two Seb’s taking it easy to get to the end in 1st and 2nd Overall, and a big gap until Latvala in 3rd so they have plenty of time to just drive to the end. ex-F1 star Kimi Raikkonen is taking it steady and keeping it on the road and is holding 7th overall 7 seconds behind Henning Solberg. 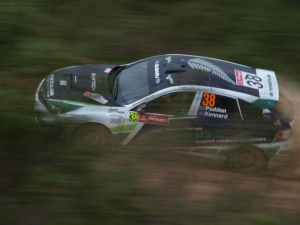 PWRC leader Hayden Paddon Had a scare when his rear suspension broke, but because of his massive lead that hes accumulated over the weekend of 8minutes due to others behind having problems, he wasn’t to worried, and is on the way to service to get it fixed. Jukka Ketomaki holds 2nd and Martin Semerad in 3rd.
Two stages left to go this Afternoon.