Fords Jari-Matti Latvala leads after Day 1 in Rally Portugal.
It was an early dry but slightly cloudy start to Day1, though no rain which meant Mikko had road sweeping duties. Giving Ogier the best position on the road. 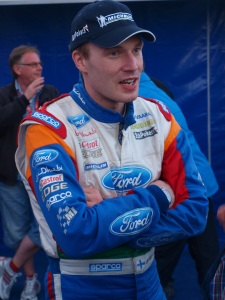 We headed out to SS2 (Qurique) which was an hour an a half drive away in the mini busses. After turning off the main highway, the roads deteriorated quickly, up to the point where there wasn’t one. But after bouncing around in the back (lucky there was plenty of head room) we headed up the mountain to VIP area about 5kms in. That meant jumping into a ‘transfer mini bus, and boy what a ride that was, with a total lunatic at the wheel getting us up the steep rocky hill, clearly thinking he was driving a Subaru WRC car rather than a mini bus. After a swift handbrake to the finish at the top with no tyres or even a mini bus left the action on the world stage begun!

On the first stage of the morning Petter was on a flyer setting the fastest time with Ford boys Hirvonen 2 sec down and Latvala 4.4. The works DS3’s of Loeb and Ogier not far behind. On SS2 Petter had a puncture and lost over a minute. On SS3 the works Citroens of the two Seb’s were fastest. and by Mid-day, Ogier led after charging through the stages to lead his older team mate by 2.8Sec.
We stayed at Qurique for the afternoon loop. And a great battle formed between the two works young drivers of Fords Latvala and Citroens Ogier. On our stage, Latvala was flat out, and took the stage win to narrow the gap between the two to just 1.8 seconds.

On the final stage Latvala took his third stage win, as Ogier played pick the road position to drop to 4th. Hirvonen, also did a great job out on the stages and finished in 2nd. Poor Petter Solberg, continued his 2011 bad luck and suffered 4 punctures throughout the day, and on the final stage, after his final puncture he had used his spare, and decided to stop and retire on the stage to super rally for day 2. Stobart Ford driver Mads ostberg retired again on the very 1st stage of the day due to broken gearbox.