Although there are still the two short 2.21km super special stage’s to run later this evening. The younger Frenchman, Sebastien Ogier has a 11.3 second lead at the end of the proper day2 gravel stages.

Its been anther eventful day out on the high altitude, gravel stages of rally Mexico. Ogier was tasked with clearing the road of the loose-surface gravel, which proved a particular hindrance on the twisty Duarte stage, the middle test of the loop. “We could not carry the speed on that stage but it has not been too bad apart from that,” he said. Team mate Loeb was pushing all morning and managed to over take the younger frenchman. By mid-day service, older seb led by 19.7.

But going into SS15, Loeb hit trouble with Gearbox problems, and was late going into the next stage, picking up a 50second penalty. “We were really late on the road section because of massive traffic,” said Loeb. “We were at the starting line in the [allocated]minute but I lost the gears and couldn’t change the gear any more. We were in third gear and it was impossible to take the start in this position and we had to work a lot on the car. It seems we’ve fixed the gearbox connection with a part from the rear bumper. It’s okay now.”

After that, loeb pushed hard to make up the time to finish todays gravel stages 11.3 behind team mate Ogier.

Ford have struggled to keep up the pace with the two works Citroens, Mikko at the end of the first stage in the morning was not at all happy with his performance, but remained in a ‘bullish’ mood and seemed the only driver not to encounter any problems. Jari-Matti dropped time with a slow front-right puncture on Saturday’s opening test. The Finn also reported a gearchange issue, which he was hoping would be rectified in midday service. In the afternoon Mikko Hirvonen said he is “taking it cautiously” in his factory Ford Fiesta RS WRC as he maintains his grip on a comfortable third place.

Jari-Matti Latvala had a replacement gearbox in his Fiesta, which was fitted at midday service in Leon. The change, coupled with a different approach to his driving, has paid dividends after he set the second fastest time. “My team told me to concentrate more on taking the line and it’s worked,” he said. “It seems there was a problem between the steering wheel and in the seat”. Latvala finally took Fords first stage win on SS17. They are 3rd and 4th after todays gravel stages.

Petter Solberg has been pushing to make up time from the problem he encountered yesterday, and has fought his way up from 13th to sixth following a charging performance in his Citroen DS3 WRC. The 2003 world champion claimed a brace of stage wins but said he could have made up even more time but for a lack of working handbrake. Thanks to problems from others he continued to makes his way up the leader board after mid-day, to finish the day in 5th. But wasn’t all plain sailing, on the final stage he had a few problems saying “You know that big jump in the middle? I broke the gear lever changing down and it has been a struggle to change down, so come into the jump in the wrong gear. I can’t accelerate and came round and spun off, oooooouioui!”

Older brother, Henning Solberg has spent most of the day fighting with power steering problems, and incurring blisters to his hands, after SS15 he was knackered and was almost ready to give up, saying,”It’s broken, I can’t continue it is not possible on the next stage, it is not possible!” Stage end reporter Julian Porter said to him “But you’re Henning Solberg, you are strong!” “I am strong, but it’s not possible on the next stage, I’m sorry!” – He didn’t give up though, and battled on. After final stage he had anther problem, his brake pedal had broken and came to the end of the stage with it flapping. But finished the day in 7th.

The M-sport Stobart team had a real tough day with all their drivers encountering issues. Denis Kuipers crashed out of the rally on the opening stage, both were uninjured. Novikov retired with an oil leak before stage 13, Mathew Wilson retired with Electrical problems on the way to the first stage of the day, Ken Block survived a spin on stage 13 having restarted on Saturday under SupeRally regulations and was in 14th, but on SS16 he tore the front suspension off and retired. Federico Villagra also restarted on Saturday after retiring on Friday. However, the Argentine’s pace has been masked by a brake problem in his Fiesta.

The battle now between the two seb’s is heating up, click back here onto Inside rallying tomorrow to find out who survives this battle in Mexico and who can win the first gravel event in the new cars. 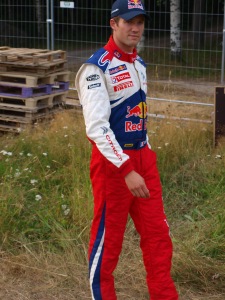 This entry was posted in WRC and tagged Mexico, rally, Report, WRC. Bookmark the permalink.