In Sweden, a few days before the 2011 WRC season kicks of, Ken Block and the Monster World Rally Team have revealed the new livery of the 2011 Fiesta World Rally Car and announced their schedule for 2011, competing in more WRC rounds as well as competing in Summer X Games, Gymkhana GRID, and selected RallyCar rallies and RallyCross events in the United States.

Block tested the new car in Sweden on Sunday for the first time and said, “It’s exceeded my expectations, I didn’t really know what to think with the 1.6-litre turbo and the type of power it had but coming from driving the S2000 [Fiesta] I’m very happy to say it’s very quick. It has a lot of capabilities but I’m braking way too early and I’m not on the gas enough. I’m just trying to figure it out. It’s part of the fun but it will take a lot of miles before I can drive this thing to the limit.” In addition, Block and the Monster World Rally Team are also pleased to announce three new sponsors for the 2011 season. Joining Monster Energy, Ford, DC Shoes, Pirelli, Dirt3, Spy Optics, Hoonigan, Ryno Organics and Alpinestars will be Mobil 1 Extended Performance, Traxxas and GoPro.

Ken Block and the Monster World Rally Team revealed the new livery and 2011 plans in a video on youtube. 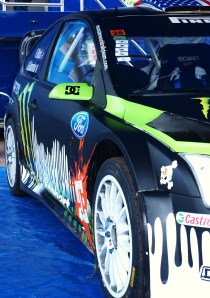