Hayden Paddon and John Kennard will drive a different Skoda Fabia S2000 rally car to the one they used to win the SWRC class at Brother Rally New Zealand in June, because they’ve joined a new team as they tackle the second half of their 2012 SWRC season.

Paddon says: “Upon a mutual agreement between ASM Motorsport and Hayden Paddon Rallysport Global Ltd, the remainder of our 2012 SWRC campaign will now be run by Austrian team, Baumschlager Rallye & Racing (BRR). We want to thank everyone at ASM Motorsport for working alongside us and helping us to achieve in our current position leading the Super 2000 World Rally Championship.”

Well-known in Europe, BRR is a race and rally team based in the Austrian town of Micheldorf and headed by multiple Austrian rally champion Raimund Baumschlager. BRR has run the factory-supported Skoda Fabia S2000 rally cars in the FIA World Rally Championship for the past three seasons and, last year, the team ran the Skoda with which Finnish star Juho Hannien won the SWRC title.

“So we’ll be in a different Fabia for Finland,” notes Paddon. “BRR have three cars that they are alternating, so our car is ready in their workshop. We will be doing a small test this Sunday and we will be trying some quite different car set-ups which will be a good learning curve.”

Paddon says the competition for Finland is looking great. “I’m really looking forward to the intensity of competition we’re facing. During the past two events, we’ve had to look after our overall championship position, but for this rally there are a lot of fast drivers and we will have to push the whole way, something I’m really looking forward to. There is nothing like being in the heat of a battle.” 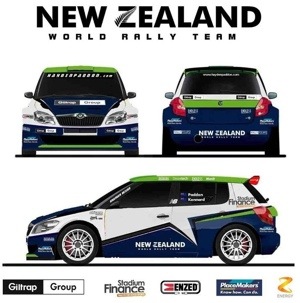