Two months after the end of the 2010 season, the Intercontinental Rally Challenge Kicks off the new season with the Classic Rallye Monte-Carlo.

The 2011 edition of the IRC series marks the centenary edition of the Monte-Carlo rally, and has over the years of rallying and F1, became one of the most famous and toughest events in the championship. Going right back to 1911 when Henri rougier took his 25 horsepower Turcar-mery to victory. The cars have changed of lot since then, now based on a 300 horsepower 2litre normally aspirated S2000 engine, Much of the route is still the same today. And we shall see the likes of Britans Guy Wilks and Norwegian’s Petter Solberg blast through the stages of Col De Turini pass.

Monte has always thrown up surprises, a rare test for real drivers, separating the

men from the boys as they drive through every condition possible on The slippy Tarmac roads, negotiating though the twisty mountain roads that are often coated with snow an ice, with grip levels changing on every corner. The events has always been on drivers skill and versatility, rather than manufacture backing or car performance. An event where Mini really made a its mark in the rally world in the 60’s. Winning the event would for sure make the headlines around the world. Last year, M-Sport made their debut on the event with their new S2000 Ford Fiesta driven by Mikko Hirvonen, and after defending off Peugeot’s Sebastian Ogier and Stephan Sarrazzan he went on to win the event. A great achievement by any driver saying, “Winning Monte Carlo Rally is something very special in any drivers career. It’s not until you have the trophy in your hands that you relise what it really means, I will never forget this”.

This years Monte will be a battle between Peugeot and Skoda. Which are both putting big names into their cars to win this prestigious event. Top entries for Peugeot include Petter Solberg, Bryan Bouffier, Francois Delecour, Stephane Sarrazin, Guy Wilks, Toni Gardemister, Bruno Magalhaes, Giandomenico Basso and Thierry Neuville. 16 Peugeot 207 S2000’s entered. 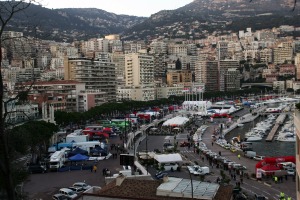 The 2011 Rally of Monte Carlo will be spread across 4 days, 13 stages that make up 337km, the longest stage being the 41.06km Burzet-St Martial stage.

12 of the stages will be broadcasted live on Eurosport throughout the event, as well as Live IRC Rally Radio broadcast and results on – http://www.rally-irc.com or on the iRally app.

This entry was posted in Other Rallies and tagged IRC, Monaco, Monte carlo, rally. Bookmark the permalink.